For The Natural Resources Council of Maine

“An essential paradox of wilderness conservation is that we seek to preserve what must change.”  — Steward Pickett and P.S. White 1985

“We must focus our attention on the rates at which changes occur, understanding that certain changes are natural, desirable, and acceptable, while others are not.”  — Daniel Botkin 1990

We have arrived at a point in history when it is clear that we have the responsibility for the survival of countless species of plants and animals. There is no scientific debate about the fact that human exploitation of species and habitat destruction are the primary forces causing the Sixth Great Extinction in the history of the Earth. As shown by Will Steffen (former director of the International Geosphere-Biosphere Programme) and colleagues, human use of the Earth’s resources has vastly accelerated since 1950. Appropriately named The Great Acceleration, the data supporting this reality are starkly terrifying to any rational observer (figures below). 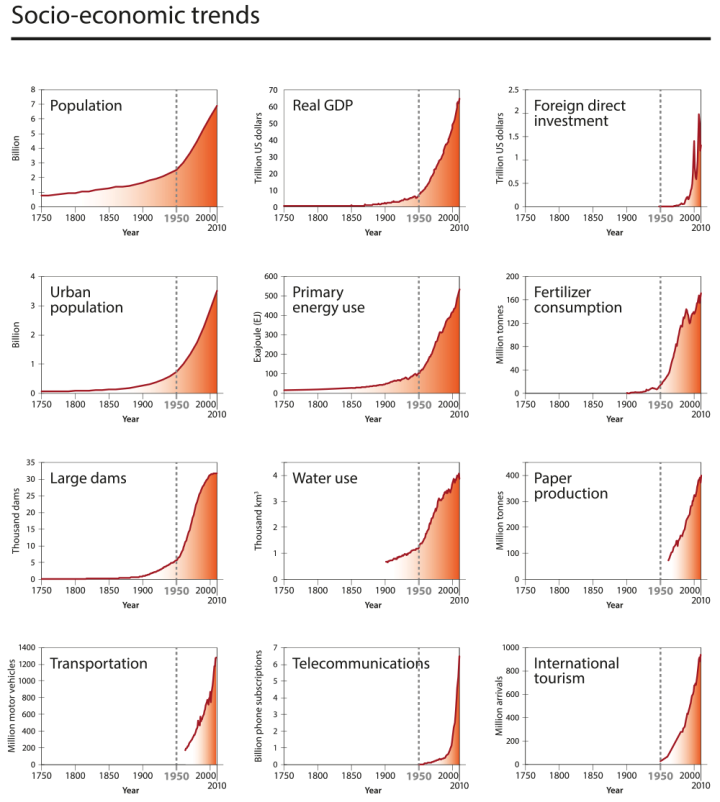 Figure from the Planetary Dashboard of the IGBP. 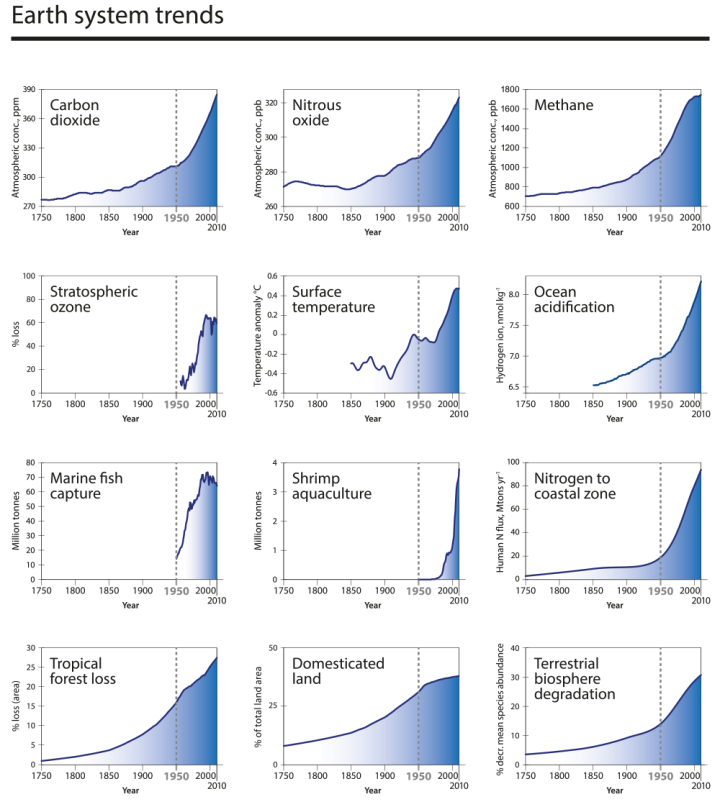 Figure from the Planetary Dashboard of the IGBP.

As our awareness of our destructive power grew and the science of ecology matured during the second half of the 20th century, conservation efforts focused on rescuing species from the brink of extinction and salvaging as much pristine habitat as possible. Typical of such efforts is E.O. Wilson’s eloquent work Half-Earth: Our Planet’s Fight for Life, which proposes that we set aside half of our planet for the preservation of biodiversity. A version of this idea would serve to maintain ecosystem form and function as climate change disrupts the biosphere.

Habitat destruction is sufficient cause for grave concern, but now we must also consider the impact of climate change on the integrity of ecosystems worldwide. Presently human-caused climate change is an amplifier, rather than a primary driver, of human impacts on ecosystems. Toward the middle of this century, climate change will inexorably become the dominant cause of ecological restructuring of the biosphere, causing species displacements and local, regional, and global extinctions. In addition, warming and ecosystem disruption are accelerating carbon emissions from the biosphere, thus compromising our ability to mitigate climate change by reducing fossil fuel emissions.

The double whammy of human overexploitation and accelerating climate change, if unchecked, will result in progressive ecological disruption on a scale not seen on Earth since the K-T Extinction 66 million years ago when catastrophic geologic events were the agents of wholesale disruptions of all of our planet’s systems. There is no other analog in the recent geological record that compares to the speed and comprehensive nature of the transformation unfolding during this century and beyond. Like the K-T Extinction, the current catastrophe will be measured in geologic time. Because the natural carbon cycle is intrinsically slow, a return to a climate uninfluenced by human emissions would require at least a millennium even if all fossil fuel pollution and warming-driven carbon emissions from ecosystems were to stop immediately. On any meaningful human timescale, the climate of the 20th Century is gone forever, regardless of our current and future efforts to control emissions.

The species composition of many ecosystems is now in dynamic transition. As the figure below shows, the growing zones as determined by climate are on the move. Accordingly, the base of the food web for many ecosystems is being transformed over a timeframe of decades. Evidence has been accumulating for over 30 years that species are responding to climate-driven changes in conditions for growth and reproduction (e.g., Walther et al. 2002). As species move, seeking better habitat, the definition of an invasive species becomes problematic. Similarly, restoring an ecosystem to some specified prior natural state is now questionable. 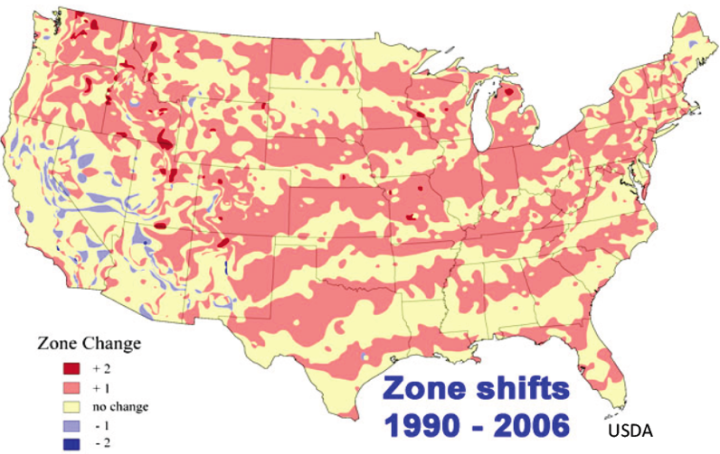 The preservationist conservation ethic that prevailed during much of the 20th century is inadequate for the challenges we face. My generation of well-meaning practitioners walked in the footsteps of conservationists such as John Muir, Aldo Leopold, and Archie Carr. We worked diligently to preserve and restore nature. Unfortunately, the goals of restoration have been poorly defined and the expected outcomes of our management efforts are constantly changing. The uncritical heuristic view considered an intact ecosystem to be one that is more or less unchanging within a human lifetime. Such a definition misses the dynamic nature of ecosystems and, not surprisingly, defining ecological restoration has been a challenging and ongoing discussion in conservation biology.

We need a much more dynamic and proactive approach if we are to maintain the integrity of ecosystems in the face of rapid change. Instead of emphasizing only the preservation of species, restoration efforts should focus on maintenance of ecosystem form and function. We must work to maintain ecosystem services such as nutrient cycling and watershed integrity, which are crucial for maintenance of biodiversity and for the wellbeing of people. This does not mean that we abandon critically important efforts to preserve precious biodiversity. Such active ecosystem management includes management of habitats to ensure the survival of species, but not necessarily at their present location or perhaps even within their historic biological community.

When I was a wildlife student at the University of Missouri, I was taught that demarcation and construction of nature preserves was the best approach to ensure the longevity of species. As species are increasingly decoupled from their preferred climate for growth, we can expect many existing preserves to be located in climate regions that are inappropriate for their various conservation functions. The conservation community is presently engaged in a lively discussion about the ethics and practicability of human assisted colonization of plants and animals.

Perhaps the most important tool available for mitigating the loss of species as changes ensue is the habitat corridor. Establishing preserves in highly fragmented habitats has typically required conservation professionals to consider how and where to place such corridors. Often natural passages between habitat fragments exist, but as proponents of rewilding (restoring ecological communities to be more like their pre-human state) will tell you, landscapes frequently present impassable obstacles such as super highways and various forms of human development. The theory and practice of habitat corridor establishment and development are nascent, but it is clear that maintaining the connectedness of ecosystems across the landscape is essential if plant and animal species are to successfully migrate as climate zones shift. Over the coming decades, nothing less than continental-scale conservation will be effective in preserving species, an idea similar to Wilson’s Half Earth.

A recent study, published in the Proceedings of the National Academy of Sciences, of the connectedness of the landscapes of the contiguous US found that most habitats in this country are highly fragmented. Only 41 percent of the natural lands have sufficient connectivity to allow species to track temperature changes over this century. If corridors existed to connect habitats, 65 percent of plants and animals could migrate to adjust to a projected 2.7˚C shift. Only 2% of the natural lands in the eastern US have adequate natural connectivity, whereas the western US is more connected because of vast tracts of undeveloped lands. The greatest benefits from constructed corridors would accrue in the southeastern US. Unfortunately, many habitats in the northeastern region are so highly fragmented that achieving connectivity will be difficult or even impossible.

The figure below shows the primary result of this foundational study. These maps drive home the critical function of corridors for preserving biodiversity in the US over the coming decades. It is important to note that a shift of 2.7˚C (used in this study as a benchmark for the US) is considered optimistic by many climate scientists given the current trajectory of emissions. The successful agreement forged in Paris in December 2015 includes commitments for emissions reductions that would limit global average warming to 3˚C, a level certain to cause profound and accelerating disruption of the biosphere. 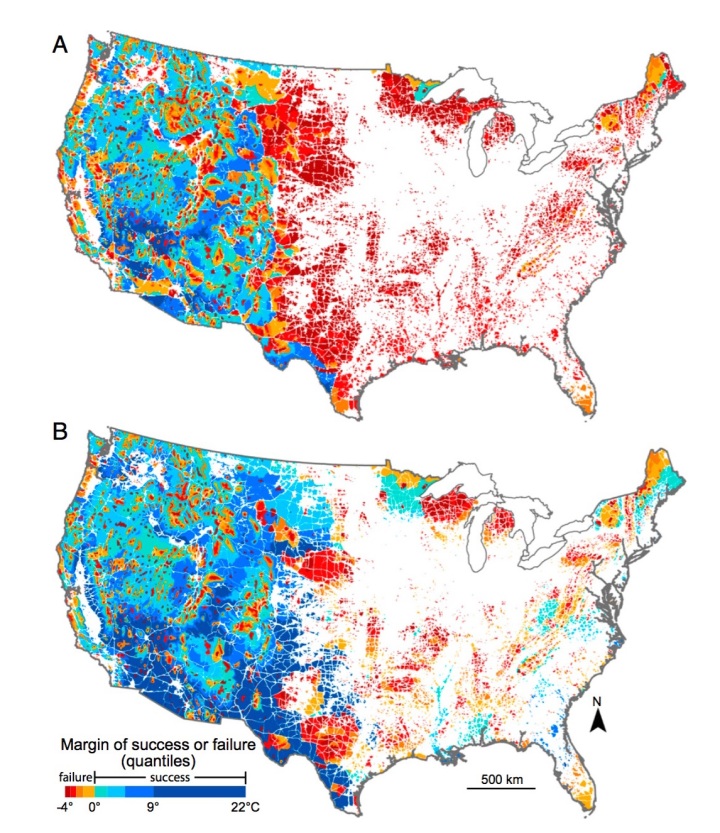 Mulkey: Landscapes with extensive coverage of a particular ecosystem may fail to preserve species even with corridors if temperature changes are extreme or there is not sufficient variation in temperature within a region to permit successful migration (e.g., western forests of Maine). The study focused on the most natural tracts of land in the contiguous US as determined from published human modification data. For more information on methods, see supporting information here.

Conservation professionals and the conservation-minded public have little difficulty with the concept of preserving habitats in order to save species from extinction. Efforts to save endangered charismatic megafauna, such as the Florida panther, typically garner widespread support. Although these efforts are worthy, it should be obvious that such species with widespread popular appeal do not well represent the enormous threat to biodiversity posed by human-caused habitat destruction and climate change. If our goal is the preservation of biodiversity, the public needs to understand that beetles and asters also must be on our list, along with countless other species that support ecosystem form and function. Scholars agree that the Endangered Species Act has limited ability to protect the ecosystems upon which species depend for existence.

An important review outlines a more comprehensive approach to safeguarding biodiversity as the world warms. In addition to expansion of preserves and creation of corridors, Kostyack et al. (2011) propose that managers reconsider landscape features that naturally impede the movement of plants and animals. Permeability of landscapes can be enhanced by (1) changes in forestry practice to improve stand diversity and continuity among patches, (2) creation of multifunction agricultural systems, (3) removing dams and other obstacles to movement in freshwater, (4) careful placement and operation of energy generation and transmission to minimize wildlife mortality, (5) re-engineering surface transportation to remove obstacles, and (5) managing residential and commercial development to preserve connected habitats. They note that assisted colonization will be required especially if temperature and water regimes change faster than species can respond through acclimation and movement to establish viable populations in novel communities.

For conservationists, preservation of species can no longer be the endgame. The biosphere is rapidly warming and its carbon emissions are increasing. Thus, as we set aside lands and waters as preserves, maintain or create corridors for connectivity, and redesign our use of the land, the ultimate goal must be ecosystem management to maximize carbon uptake and minimize greenhouse gas emissions from natural sources. By focusing on this overarching mission, we can also ensure that we preserve as much biodiversity as possible as Earth systems are disrupted by climate change. In their seminal writings of the early 1970’s, the pioneers H.T. Odum and E.T. Odum understood that maintenance of ecosystem form and function is essential for supporting diverse living systems. In virtually all cases, biological diversity is inextricably linked to how carbon moves through ecosystems. As an ecologist for over 35 years, I am convinced that we have the basic tools to begin carbon management of the Earth’s biosphere.

Cooperation on a massive, global scale is necessary to address these large scale shifts in Earth systems. I see encouraging signs that such a sea change in our relationships with each other and the planet we inhabit has begun. It is worth noting that because of nearly universal access to information, never before in the history of humanity has such cooperation been as possible as it is now. As noted by the scholar of environment and religion, Bron Taylor,  a science-grounded spiritual ethic about the ecology of our planet is on the rise. This contrasts with many traditional religious interpretations of people’s interactions with the environment, which are not typically based in science and to varying extents may obviate human responsibility. Noting our responsibility to creation, Pope Francis has issued the historic encyclical, laudato si’, titled On Care for Our Common Home. I am hopeful that efforts at climate mobilization and ongoing efforts derived from the Paris climate accord will succeed before we lose our window of opportunity to salvage a livable climate for our children. It is possible that the Paris agreement will be the historical turning point ushering in a new era of sustainability and proactive mitigation and adaptation.