Jim Hansen has used the phrase “essentially game over” when referring to the greenhouse gas emissions that would ensue from the use of Tar Sands oil as an energy source.  To be sure, there is one heck of a lot of carbon in this one source, and Bill McKibben has referred to the proposed pipeline as the “fuse to the biggest carbon bomb on the planet.”  As discussed over at RealClimate by Ray Pierrehumbert, the amount of carbon in this single source is equivalent to almost half of the future emissions needed to push us above 2 degrees C average warming, which is the point at which the biosphere will become a net source of CO2 as processes such as respiration and burning exceed the Earth’s photosynthetic capacity.  The Canadian Tar Sands oil reserves are roughly equivalent to the world’s total reserves of conventional crude oil.  Is it any wonder that TransCanada is fighting tooth and nail to deliver this oil to consumers?  Obviously, the profits to be made from this single source of oil are immense.  Moreover, we must consider the life cycle carbon emissions associated with mining and transporting the Tar Sands oil.  Assuming in situ extraction, we must add 23% – 41% to the carbon footprint necessary for conventional petroleum, thus making this arguably the dirtiest oil on the planet.  The Tar Sands oil is the single largest contributor to greenhouse gas growth in Canada and accounts for 40 million tons of CO2 emissions per year. 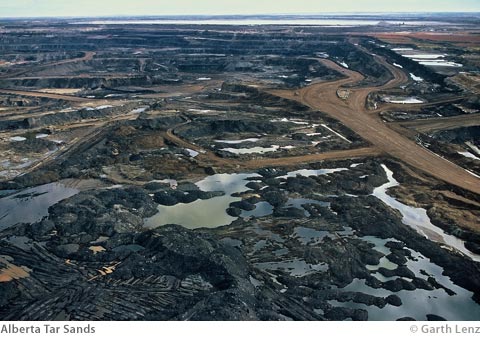 The article at RealClimate makes the valid point that not all of the estimated 230 gigatonnes of carbon in the Canadian Tar Sands would be mined.   Assuming full production, it is perhaps reasonable to assume that somewhat less than half will be delivered to market over the lifetime of extraction from this single source, although one estimate is that 70% would be recoverable.  In combination with the other sources of coal and oil on the planet, it is clear that either amount would result in massive pollution.  One rationale for using the Tar Sands oil is that this should be viewed as a transitional source of energy to be used while we decarbonize our economy.  This might be a reasonable argument if there were any evidence whatsoever that the US is moving in the direction of reducing carbon emissions from fossil fuels.   Ray Pierrehumbert draws the obvious parallel to the alcoholic who puts the vodka in the cupboard while promising to drink only a little bit.

What is most troubling about this discussion is that our estimate of the additional warming from this carbon is based on a partial understanding of only first-order feedbacks.  The initial radiative forcing from CO2 added to the atmosphere is only a portion of its warming potential.  To this must be added the near term, or first-order, feedbacks of clouds, disappearing sea ice, and several other relatively short-acting factors such as black carbon (enhances warming) and aerosols.  Aerosols are complex, but their overall global effect in the form of pollution from smoke stacks and tail pipes has been one of cooling because they reduce the amount of sunlight reaching the Earth.  This masks the warming potential of the greenhouse gases.   Indeed, part of the reason for a hiatus in warming for the last few years may have been increased pollution from China.  Using only these first-order feedbacks, it is deceptively comforting to think that we will not cross the 2 degree threshold for possibly several decades while emitting up to 500 gigatonnes of carbon from coal and oil.

This is a considerable overestimate of our remaining latitude for emissions.  There is ample evidence that the second-order, longterm feedbacks on climate are emerging much faster than previously thought.  Specifically, the timeline for permafrost thaw seems to be quite short.  A recent paper from the National Center for Atmospheric Research estimates that the tundra will become a net source of CO2 by roughly 2025, a date uncomfortably soon.   This estimate ignores the amplification of warming from methane and first-order warming from new CO2 emitted as the tundra progressively thaws.  Similarly, the Amazon has experienced two droughts of 100-year severity within five years, inducing widespread tree death.  The scale of carbon loss from tree death and burning from these droughts will effectively negate the carbon uptake potential of the Amazon basin for an entire year.  Note that the Amazon basin is so large that it could hold most of Western Europe and the UK with room to spare.  Finally, recent research has found that there is widespread forest dieback in progress.  While the cause of this is complex and only partially related to climate change, it nonetheless adds to the greenhouse gas burden of the atmosphere.  It has now been confirmed that for most forest types dead trees really do burn more frequently than living ones.  Overall, I see no processes or factors that might slow warming during the coming decades.  Thus, I think that we will cross the 2 degree C threshold much sooner  than previously estimated, and I would argue, almost certainly before 2050.

I know that I share a sense of urgency with many other scientists who have studied climate change over recent decades.  During our recent trip to DC to circle the White House, one of our students asked me if I was afraid.  In all honesty, the answer is yes.  From my study of the literature, I believe that our emissions must peak no later than 2020, with strong mitigation thereafter if we are to retain any certainty of avoiding significant and dangerous climate change during coming decades.   A recent report by the National Research Council shows that peak warming is approximately linearly proportional to the cumulative carbon emitted, and that this warming will persist for the next thousand years before beginning a slow decline over the next ten thousand years.  Yes, you read that correctly: The emissions we produce today will have their effect over a millennium and beyond.  I daresay that this gives new meaning to the concept of seven-generations sustainability.  Once the biosphere becomes a net emissions source, we effectively lose leverage to stabilize greenhouse gas concentrations through our efforts at mitigation.   That is not to say that mitigation after that point is useless. Quite the opposite is true in that our efforts will need to be all the more strenuous to avoid catastrophic climate change.

It has been suggested to me that my active messaging on the science of climate change is inappropriate for someone in my role as a college president.  I find this quite odd, because I thought that part of my job was to do everything in my power to ensure a bright future for our students.  I urge all of us to take this science seriously and to act in every acceptable way to influence our policy makers to begin massive mitigation of greenhouse gas emissions.   To the greatest extent possible, we simply must leave the carbon in the ground.  The good news is that there are now compelling data that the conversion to a green economy will be a source of millions of jobs and economic renewal.   The bad news is that the dinosaur economy will be hard to transform.